Epitaphs on the tombstones read “Max ‘Boobah,’ Beloved Son,” “Heart of The Family, Fajita and Tamale,” and “The Spice Girls, Cinnamon, Spice and Pepper.”

The Martin clan’s business is tending to the final resting places of other people’s beloved family members. The mourned include dogs, cats, birds, rabbits, goldfish, reptiles and the occasional cremated remains of fellow humans who chose to be put to rest with their pets.

The Martins run Hartsdale Pet Cemetery in Westchester County, New York ― the oldest operating pet cemetery in the United States. Established in 1896 by veterinarian Samuel K. Johnson, it occupies about five acres of a former apple orchard. The grass is neatly trimmed, and there’s a flower care plan for $85 a year that leaves graves adorned with begonias in the summer and pansies in the spring. On the misty October afternoon we visited, the cemetery was quiet with only the occasional visitor. A toy burger rested on one tombstone.

Human graves are often stripped of emotion, the tombstones engraved with just names and dates. But people who buy cemetery plots for pets want to express their affection. At Hartsdale, there are earnest loving messages like “You will live in our hearts forever” and whimsical epitaphs like “My Dear Little True-Love Hearts, Who Would Lick The Hand That Had No Food To Offer,” which is inscribed on a 50-ton mausoleum holding the pets of a wealthy real estate investor’s wife.

There are more than 80,000 animals buried here. Beyond the cats and dogs that populate the majority of the plots, the less usual residents include a lion cub that belonged to a Hungarian princess and Ming, a Bengal tiger raised in a Harlem housing project who died in 2019. Famous pet owners like singer Mariah Carey have buried pets here.

Ed Martin Jr. has been director of the cemetery since 1974. He oversees the business with several family members, including his sons Ed Martin III and Brian Martin and daughter-in-law Saskia Martin.

“You may think that your job is selling a plot, opening a grave, and burying a pet and putting dirt back on the ground,” Ed Jr. said. “But the business goal is that you want people who leave here after they have buried their pet to feel a little bit better than when they first came.”

If Stephen King’s horror novel “Pet Sematary” is your only frame of reference, you may think of a pet cemetery as a spooky place. But Hartsdale is a tranquil site that is listed on the National Register of Historic Places. And none of the three Martin men believe in pet ghosts. They do believe they’re providing a valuable service for grieving people.

“It makes it even more difficult when you’re holding the grief in,” Ed Jr. said. “That’s how many pet lovers feel. When they come here, they say, ‘Wow, I’m not the only person who is going through this. This has been going on for 100 years. Maybe I’m not crazy for loving my pet so much.’”

HuffPost talked to Ed Jr., Ed III and Brian about their work:

Ed Jr.: There are many, many people who think of a pet cemetery as frivolous and something people shouldn’t waste their money on.

What I usually say to that is, “Have you ever been to the cemetery?” Maybe you’ll have a better judgment that it’s a service to some people.

People can spend their money any way they want to. If this is going to help you get through the grief and give you some closure, then it’s probably worth it.

Cremation, I think people get. With burial, I hear from some people, “Well, I’d rather use the money to rescue other pets than to spend it on a lavish burial for my pet.” And again, I would just say, people can do what they want with their money, and if it’s your feelings that are involved and you are grieving, who is anybody to judge how you spend your money and how you grieve.

Burying a pet is not the cheapest option.

Ed Jr.: This is not an inexpensive thing to do. We try to make it accessible for most people. We do have a payment plan if they really want to come here and can’t afford it. We try everything that we can. There are some people that unfortunately I have to make the decision that they really shouldn’t bury because it might be over their heads. I encourage them to cremate their pets ― it’s far less expensive than burying.

If you were burying, for example, a cat or a small pet, you would need a 2-foot by 3-foot plot. The least expensive [option], for the plot itself and the right to bury, is $1,150. The maintenance is $79 ― you pay for the first year of maintenance when you buy the plot. The pet must be buried in a casket. The cost of the casket would depend on two things: how big it is and how fancy you want it. The least expensive one, we think it’s very dignified, it’s not just a crate. It is made of plywood. It is stained and lined, meaning it has a pillow and a blanket in there. That casket for a small pet would be about $400. You then pay the cemetery for the work of doing the burial, meaning opening and closing the grave, and that’s about $550.

So in round numbers, if you have a smaller pet, meaning up to a cocker spaniel, and you took the least expensive alternatives, including the first year’s maintenance, you’re looking at about $2,200.

There is no requirement that you put a monument on your pet’s plot. However, if you do, we have a pretty good arrangement with a monument company. The least expensive monument would be about $900.

It’s a business that runs on compassion.

Brian: You make it completely not about business. For instance, I had a woman today who called. She was very upset. She bought the grave ahead of time last summer and she just buried her pet two weeks ago. We’ve been going back and forth about the monument. She said, “Brian, I’m sorry, I’m usually very quick to make decisions, and I don’t want to be that person that’s flip-flopping.” I said, “It’s not about that. Take your time. We’re going to get it ready.” The conversations flow. She starts telling me about her dog. We start talking about dogs that I’ve lost in the past. The business is, at that point, gone.

You bond over the loss of a pet and your love of pets and all of that, and you learn about each other’s lives.

Ed III: Death is extremely individual and very personal. What may be right for one person is completely wrong for another person. You have to be open and sensitive and find out what they want.

People want to hear about their atypical profession.

Brian: The only time I will tell a white lie about what I do, it’s not about, “Oh, someone is going to think this is a weird job.” For instance, if I get invited to a wedding, and I sit at a table with a bunch of strangers, and everyone is going around the table, “What do you do?” sometimes I’ll be like, “I work at my family’s business.” If they go further, “What do you do?” I know when I say, “I work at my family’s pet cemetery,” the whole table is on me ― not in a crappy way. I know I’m going to have to explain my life for the next 40 minutes.

Ed III: When I was younger, I did [get strange reactions]. And today, not at all. Some of my friends are bankers, lawyers, and I’ll be at a party and people are like, “What a refreshing thing to have someone talk about a business other than banking or finance. Tell me about it.”

Brian: Honestly, I thought of it as a way where I knew that I would be getting a better paycheck than I was making at the liquor store [back in my early 20s] where I was making nothing, making tips. And I’d figured out what I wanted to do while I was starting here. And then here I am, and I am very happy. But that’s the way life works. You cannot predict a thing. My first job was here in this office.

Ed III: I started working in the summers here. I was 14 when I first started. For me, I was cutting grass and planting flowers. It was more of a gardening type of role.

I looked at the monuments and the people visiting and puzzled over it and didn’t really understand it. It wasn’t until my own family dog [died] that I felt the grief of that and got to understand why people felt the way that they did.

At least some of them will be buried at Hartsdale.

Ed Jr.: Of course. And my parents and my in-laws are buried here right now.

Ed III: Probably yes. I’m one of those people that doesn’t like to think about my demise.

Brian: It’s a little early to be thinking about my death. I know I want to be cremated. All four of my grandparents are here and I know that my parents are going to be here. I’ve given a good chunk of my life to this place as well, and not only that, the dogs that I’ve had in my life and I love more than anything in this world are here, too. I haven’t fully committed, but probably.

Running a pet cemetery can change your relationship to grieving and death … to a point.

Brian: I learned a lot from [my dog] Nellie’s death. It definitely taught me more compassion and empathy by going through that. That’s something you need to have in order to work here. But I didn’t learn it from working here. I learned it by going through it like the people on the other side of the desk.

Ed Jr.: [Laughs] I’m still not ready to die. This is comforting to me, knowing that I’m going to be here.

Interviews were edited and condensed for clarity. 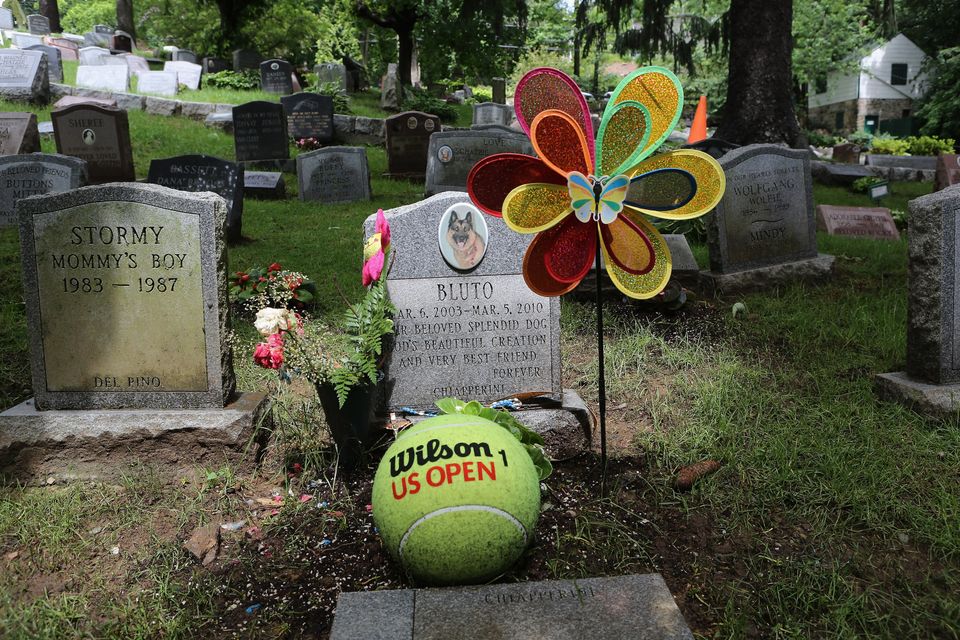